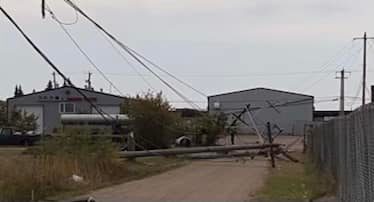 Around 7:30 Bonnyville Reginal Fire Authority was alerted to the power outage and a downed powerline and arrived on scene.

BRFA Regional Fire Chief Dan Heney says a tractor-trailer snagged a low-hanging line and pulled down 5 power polls, one of which was a high voltage line.

Heney says this is the reason a big chunk of Bonnyville and the M.D. were without power this morning.

“There was a number of power lines down and a fair number of bystanders not understanding what was going on.”

No one was injured when the power lines fell.

The Fire Chief says not to expect repairs to be completed until the end of the day but the people of Bonnyville’s power is in good hands.

“The people at ATCO were already on site with all the equipment to fix the issue.”

Dan says there were already new power poles ready to go and ATCO had already started drilling and removing the busted ones when they left.

The fire crew had left the scene once the town was able to set up some road closeures barriers.