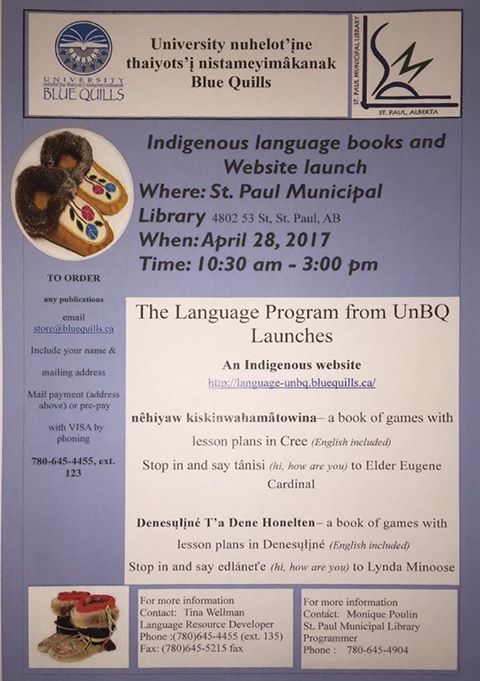 University Blue Quills is holding an event at the St. Paul library on Friday launching two new books, one written in Cree and the other in Dene.

“They’re books of games,” says Language Resource Developer with the University Tina Wellman. “It’s games you can play while learning the language. Each game has three lesson plans and we have the English versions at the back.”

Blue Quills had previously published about twenty booklets for beginners and intermediate learners a few months ago.

The University is also launching an indigenous website in Dene and Cree as well as part of their efforts to revitalize the languages. They just launched a course teaching Dene earlier this year. Around forty three students are enrolled across both of them.

Wellman says she sees new life being brought to both languages. “Especially with the growing number of students here, each year there’s more at it… we’re excited about the language and I do see a big difference.

“A lot of it has to do with the healing that goes with it. Because of the residential schools and the 60s scoop, there’s a lot of grief and shame and loss involved with the language. I think there’s slowly but surely been some healing. There’s a long road ahead but certainly it’s really good to see some books out there in Cree.