Two Portage College Alumni in U of A Art Exhibit 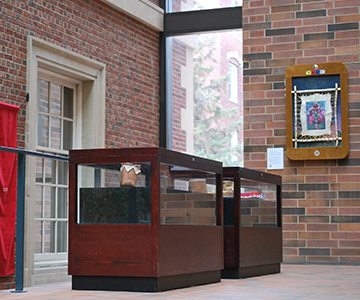 Two Native Arts & Culture alumni from Portage College will have their work displayed at the Hope and Fear exhibition at the University of Alberta.

Amber Weasel Head, graduate of the Artisan Entrepreneurship program and Artist in Residency participant has chosen two of her pieces. The first is She Carries Her Prayers, 2016, a bag that represents how her ancestors carried their smudges for prayers. The other piece is called Humming Bird Blessings, 2016, a traditional birch bark basket that would have been used to store things such as medicines, water and berries. Amber’s art reflects her understanding of her cultures and her connections to her ancestors. Her work includes beadwork, painting, mixed media, film making, performance and digital arts.

Jaime John-Kehewin is another student that graduated from the Artisan Entrepreneurship program. Jaime has selected three of his pieces; Waspison Moss Bag, 2016, Feather Box, 2016, and Deer Dew Claw Bag, 2016. Jamie is a multi-disciplinary artist who incorporates carving, painting, sculpture, print making, nature crafts, and ceremonial/powwow regalia into his work. Jaime’s works and performances have been showcased in galleries and various venues throughout western Canada.

The exhibition opened on April 8th and will feature fifty or so artists.