Pontiacs Alumni Off to Switzerland 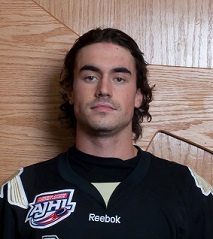 Thomas Kohle has been playing for the University of Guelph for the past four years, but he’s been a Bonnyville Pontiac and will soon be playing for SC Langenthal in Switzerland.

The 6-foot-5, 220 pound defenceman became the third Guelph Gryphon men’s hockey player to sign professionally since the end of the season.

Tom who is from St. Thomas, Ontario played for the yaks during the 2012/13 season playing 61 games scoring 2 goals and 20 assists before heading back to his home province. While playing for the Gryphons, he appeared in 118 games and was part of the Gryphons squad in 2014-15 that were crowned OUA Champions and CIS bronze medalists.