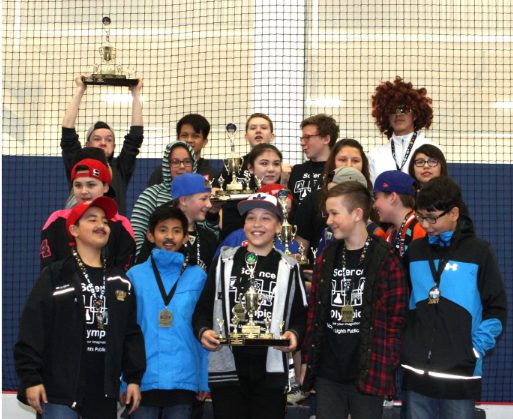 Northern Lights students catapulted,  floated, elevated, and stuck their noses  out to meet the challenges presented to  them at the 2017 Northern Lights Public  Schools Science Olympics held  yesterday at the  Bold Center in Lac La Biche.

A total of 340 students in grades 6 to 9  competed in teams of five, using their  science knowledge, creativity and  teamwork to solve a series of four  challenges.  For the first challenge, students were  given paint sticks, tape, elastics and a  few other materials to construct a Ju  Jube Catapult. Once their catapult was  built, they had to use it to launch a ju  jube. They received bonus points if their  ju jube landed in a hula hoop.  The second challenge was to build a tin foil boat. Each team placed their finished boats in a tub  of water and added pennies until the boat started to take on water.  There was lots of laughter during the third challenge as students had to create “Pinocchio  Noses.” Using newspaper, string and masking tape, they had to build the longest nose they  could and then attach it to someone’s face.  The day wrapped up with the Marshmallow Elevator challenge, with students building elevators  out of popsicle sticks that had to lift a marshmallow up in a “bucket.”

“We are very excited to be involved in the Science Olympics this year as a sponsor and as a  volunteer judge,” said Bill Britton from Britton’s Your Independent Grocer. “It is so exciting to see  the brilliant minds of some of the students at work. We are so proud of what these students  accomplish and are very happy to be a part of an event that has such a great history and will  be a great experience for them. This event is something that they will remember for the rest of  their lives and be a part of many “remember when” conversations.”

Students from 13 schools in Northern Lights competed in the all-day event. First, second and third  place winners were announced for each grade level (grades 6, 7, 8 and 9). All winners will have  the opportunity to compete at the APEGA Science Olympics being held in Cold Lake on April  22.