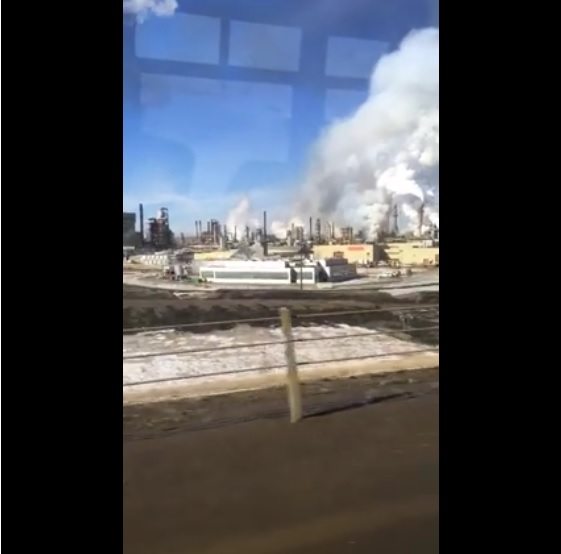 UPDATE: Sycrude Canada says the fire at the Mildred Lake Upgrader is now isolated and under control. The company has confirmed one employee was taken to hospital, and their family is being supported. All non-essential workers are no longer in the immediate area of the fire.

Alberta Health Services has issued a precautionary health advisory for Fort McKay, along with Civeo’s Beaver River Executive Lodge and Athabasca Lodge, and Syncrude’s Mildred Lake Lodge. Because of smoke and low levels of Sulphur Dioxide, some people could experience health problems.

Highway 63 has reopened. The Alberta Energy Regulator is on scene investigating.

An explosion and fire has broken out at Syncrude Canada’s base plant, 40 kilometres north of Fort McMurray.

The Rural Municipality of Wood Buffalo says the blaze broke out just after 2 p.m. The company has confirmed its firefighters are already at the scene of the fire at its Mildred Lake Upgrader.

The nearby Fort McKay First Nation has issued an air quality warning due to smoke in the area.

Police have shut down one lane of traffic on southbound Highway 63, and are requesting for everyone to avoid the area. There remains no official word on the cause of the explosion or any injuries at the scene.

An explosion at the facility in 2015 stopped operations, but no one was hurt.

My thoughts and prayers are with everyone at, or near Syncrude today. Stay forever #YMMStrong. Again, stay Safe. Resilient. Together.

Anxiety high for those waiting for friends and family to connect. Don't let rumors run the social media mill, facts will come when they can.