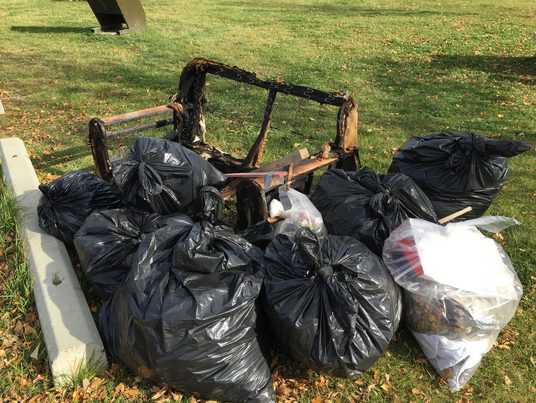 After an extremely messy shoreline cleanup of Sandy Beach last week, the Beaver River Watershed had a much less stressful time at Jessie Lake with Notre Dame students in grade 9 and 10. the official report though, is still pretty disgusting.

Chantelle Adams with the Alliance says the amount of garbage collected was similar to last year, with cigarette butts being the most common item. In fact, precisely 1,098 of them were collected, with 53 cigar tips as well. Together they accounted for nearly three-quarters of the items collected. Adams says a lot of these were found next to garbage cans. The report also details that 126 food wrappers, 28 take out containers and nearly a hundred plastic bags picked up as well.

Things get really revolting though under a section labelled “personal hygiene.” It appears the group had the misfortune of discovering nine condoms, five diapers, one syringe and two tampons* around the lake.

Adams says the oddest item last year was a full kitchen sink, while this year that distinction goes to the frame of a burnt couch. Also sticking out in the report, six pieces of cutlery were found scattered around the lake. Five toys and nine pieces of clothing or shoes were uncovered as well.

There were some positives to be taken from the report though. Despite the numbers, this is not considered a particularly high amount of garbage around the lake.  Also, it appears that decades of public awareness campaigns  about the danger of plastic six-pack rings to wildlife is working in the area. Not a single one was found. “Jessie Lake is a beautiful ecosystem and we do want to protect it” Adams says, “There are lots of trash cans down there and we just hope people continue to use them as they have been.”

*The report does not specify whether or not any of these products had been put to use. Let’s hope for the volunteers’ sake they were not.