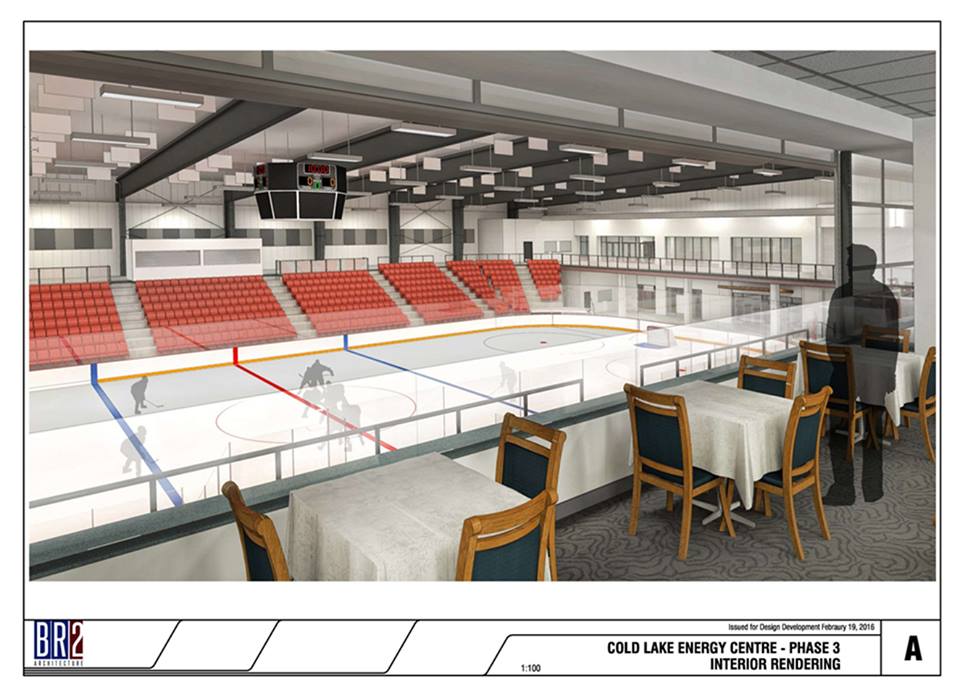 Cold Lake has awarded the contract to begin phase 3 of its expansion of the Energy Centre.

Construction is scheduled to begin in the fall. New additions include a second arena, 360-degree climbing wall, a lounge, office and storage space for local non-profit groups, a significant expansion of the concourse area, and a mini-stick arena.

“This is another large step forward in council’s vision for the Energy Centre and Imperial Park,” says Mayor Craig Copeland. “Our North Arena has served the community well, but the building is tired and past its service life. With Imperial Park centrally located and easily accessible by trail, and now public transit, it is truly becoming the region’s premier recreation hub.”
The new arena, designed in consultation with BR2 Architecture, will seat just under 400 people, with its own dressing rooms and a warm viewing area at the east end of the arena. People in the viewing area will also be able to see the climbing wall, which will be a 360-degree, two-story structure.
The lounge will feature a catering kitchen and a bar, and will overlook both the new arena and Imperial Oil Place Arena, with the option to open the windows to accommodate private booths for concerts in Imperial Oil Place. The second floor concourse will be expanded to allow for access to the new arena, as well as an upper viewing area for the climbing wall. The concourse on the east end of the new arena will also feature a mini-stick arena.
The construction contract was awarded to the construction firm Bird, with an estimated completion date in the spring of 2018.The Phase 3 expansion is proceeding with a construction budget of $20 million.
“We have looked at every chance to make these amenities complement each other and the existing space,” Copeland says. “This phase of expansion will help to make sure that our youth have top-notch recreation facilities available year-round.”
With the contract for the Phase 3 expansion awarded the multi-propose, artificial turf field project will move into detailed design before tender documents are prepared. The gymnastics centre, dance facility, and field house expansion will also move into the design and development process.
Prior of finalizing the location of the planned facilities, the city will be further updating the Energy Centre Master Plan in light of requests from potential user groups such as the Lakeland Catholic School District, which has requested that the city consider Imperial Park as the site for its future high school.
“Imperial Park and the Cold Lake Energy Centre have seen plenty of growth in amenities, usership, and interest over the years and we want to make sure that the facility and the park are developed in a manner consistent with council’s vision,” Chief Administrative Officer Kevin Nagoya said. “Master plans are, by their nature, living documents and after this phase of expansion, we feel it is an appropriate time to take a step back and see how far we’ve come and where we want to go.”