St. Paul RCMP confirm that Natasha Cardinal has been located safe and unharmed. The public and media are thanked for their assistance in providing information to help police locate people who are reported missing.

It is believed Natasha Cardinal may be pregnant and RCMP have concern for her safety and well-being. Police would like to speak with Natasha and are sharing the following details to assist in locating her.

Natasha Ella Cardinal is described as: 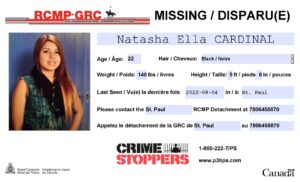 If you have any information on the whereabouts of Natasha, please contact the St. Paul RCMP at 780-645-8870 or your local police.