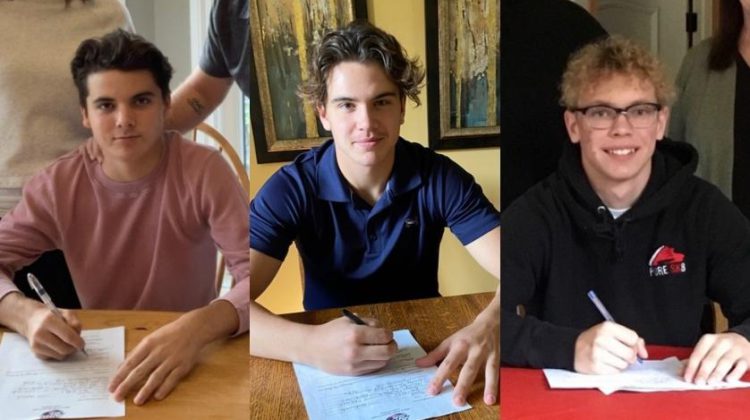 The three signings for the 2022-2023 season have two local Bonnyville boys join the team.

Brent Hoshowski and Dylan Hebert both hail from Bonnyville and Noah Heinrich come to the team from Provost, Albert.

All three players joining the team attended the Pontiacs main camp this year.

“I choose Bonnyville because of the amount of players that they move on to the next level,” said Hoshowski. “It also gives me a chance to give back to the community that raised me. It feels great to have an amazing organization and coaching staff to help me along my journey.”

The two Bonnyville boys, Hoshowski and Hebert, will be playing on the same team on the Lloydminster Bobcats U18AAA team.

Hebert says he always wanted to be a Pontiac.

“Watching what the Pontiacs do with their team development and with their history of getting athletes to the next level was impressive,” said Hebert.

“I wanted to go to the best place to develop as a hockey player and person, and being around the team this year during main camp and pre-season, I had no question that their coaches can help get me to the next level and help me pursue my dream of playing college hockey.”

Herbert says he has a great connection with the coaches because of how involved the Pontiacs were with the minor league.

Meanwhile, Noah Heinrich drew a lot of attention to himself from NCAA scouts as he was attending the AJHL Showcase.

Heinrich says the Pontiacs offered a great group of people who were very welcoming on day one.

“The commitment the players and coaches make to be the best versions of themselves each and every day, whether it’s on or off the ice, is something that I wanted to be a part of.”

Heinrich countries and says he believes the Pontiacs will put him on the road to be a very successful player.

The Bonnyville Pontiacs are excited to welcome these prospects into the organization and wish them good luck in their upcoming seasons.