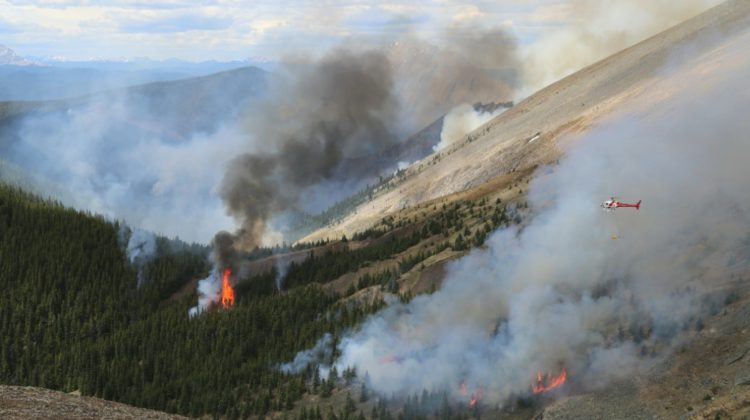 Prescribed burn along the eastern slopes of the Rockies. [Photo: Forestry Division - Alberta Agriculture and Forestry, used with permission.]

Alberta burns off between two and three thousand hectares per year of what forestry officials determine is hazardous, dry areas in an attempt to mitigate the fire risk later in the year. Officials say this year prescribed burns cost the province $450,000 removing about 2500 hectares, which is close to their yearly goal.

The practice builds on First Nations traditions in which fire was used for numerous purposes including managing grazing areas for wildlife, clearing pathways and removing dry, dead material to reduce the dangers of massive wildfires.

Provincial Prescribed Fire Program Coordinator, Dave Schroeder explains some of the areas they tackle each year include Lac La Biche as well as the Cold Lake Weapons Range region. In some cases staff from Agriculture & Forestry will work with various municipalities across Alberta, as they team up to do prescribed burns.

Schroeder notes that half of the controlled or prescribed burning done this year was in the Lac La Biche area which accounted for about 1300 hectares of the total burn.

There are a number of First Nations communities in the Lac La Biche area and Alberta Forestry combines efforts with them every Spring.

“The folks from the Lac La Biche forest area work with those First Nation communities, and they have been for decades; where in the Springtime, they’ll go in and burn the fields. The crews are from the community itself. It is a very well established process.”

On the weapons range, Schroeder says this is done in conjunction with National Defense and they too recognize that they have some hazardous areas there.

He says annually they get through about 80-90 per cent of hazard reduction burning in and around communities. This usually happens in early Spring with the ground still frozen and even snow in some places, ahead of the fire season.

Predicting prevailing wind conditions and weather are very important factors and Schroeder notes they have a good weather person on staff. Hazard reduction burns wrap up by about mid-May.

Surrounding communities are notified ahead of a burn near their area. For larger areas, a helicopter is used in the process. Schroeder explains what the process typically involves.

“On that day, they will go out mid-morning and get the crews ready and start burning perimeters as soon as they can get ignition. Then they will spend a few hours burning a perimeter around the field. Then they can do strip patterns. So we don’t burn the whole field all at once. Then when the field is done, they can move on to the next field.”