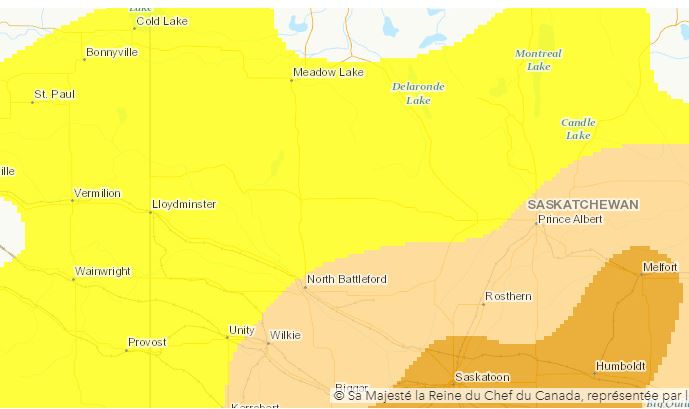 The Chair of Alberta Beef Producers is making a call for farmers and ranchers to lobby their municipalities to declare a state of agriculture emergency.

Melanie Wowk who runs about 300 head of cattle with her family at Beauvallon in the County of Two Hills says the declaration will raise the awareness for the government of Alberta as regards to the severity and just how widespread drought conditions are impacting producers.

Wowk says the other program that producers can access is Agri-Stability which they have to sign up for individually. That takes into account a five year average of their income. 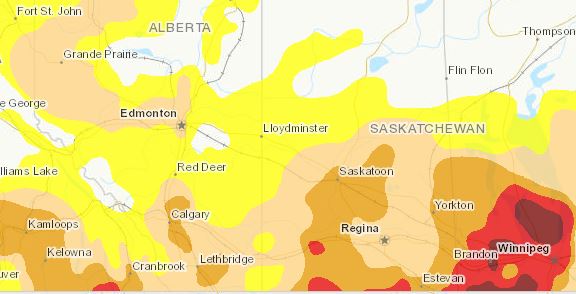 Drought conditions in western Canada are being experienced in varying levels of severity from Manitoba across southern Saskatchewan into Alberta and B.C.

The Lakelands and Lloydminster area are described as abnormally dry on the Canadian Drought Monitor website.

Wowk is also concerned that the excessively hot temperatures are affecting the development of crops. The hot conditions are ripe for grasshopper eggs to hatch. For cattle producers pastures have also dryed out. The availability of hay is also a concern and that raises questions about feed stocks into the Fall. They are encouraging crop producers who will be unable to salvage a lucrative harvest to turn it into cattle feed.

“We are trying to get those crop producers who have crop insurance into their AFSC office, where they can ask for a pre-harvest assessment and if it is deemed that the crop is no longer viable, they can cut it down and make silage or they can put cattle into those crops.”

With calves heading to feedlots in the Fall there is the concern over where feed will come from. The unfolding crisis will also have implications for consumers and the price of beef at the grocery. Wowk says producers will hope to make it through Winter to next Spring and hopefully have some rain then.

“We really need to keep our mother cow numbers up. Our national herd is shrinking in size. I believe that if producers liquidate, there is a good portion of them that will not come back.”

Wowk will be meeting in Calgary with Ag Minister Devin Dreeshen to impress upon him the urgency of the situation.