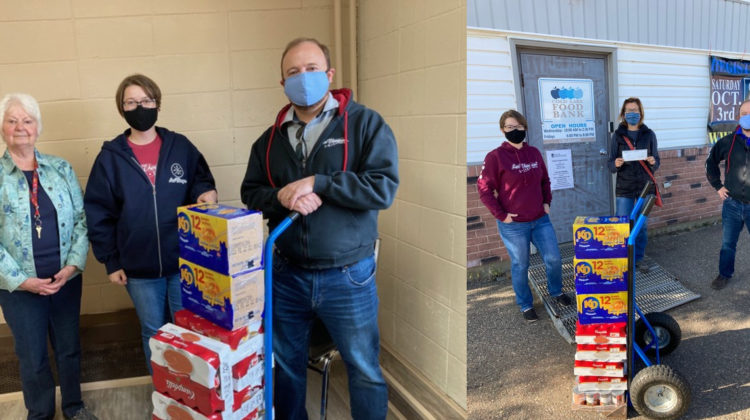 The makers of popular fishing lures recently made a donation to a pair of Lakeland food banks. Len Thompson Lures executives were recently in the area dropping off donations raised during their #FishingforFoodBanks2020 campaign.

Six unique, limited edition lures were created and 50% of the sales of these items were to be donated to community food
banks.

On September 16th company president Brad Pallister and Marketing Manager Jessica Pallister-Dew were in St. Paul to make a donation of food along with a cheque. The next day The Cold Lake Food Bank was the recipient of a donation. Meanwhile, the company says local sporting goods stores Warehouse Sports in St. Paul and Poachers Corner in Glendon helped to contribute donations by buying the special lures.

Seventeen communities have been aided and nearly $13,000 has been raised on behalf of the campaign, says Len Thompson Lures. Smaller to mid-sized communities with a rich history of fishing, hunting, the outdoor conservation activities have generally been the recipients of the donations.

The company says the response from the anglers and the community has been so positive, the company decided to make the campaign last until September 30th. The Fishing for Food Banks Lures are available on the company’s online website along with Warehouse Sports and Poacher’s Corner.

Six unique, limited edition lures were created and 50% of the sales of these items were to be donated to community food
banks