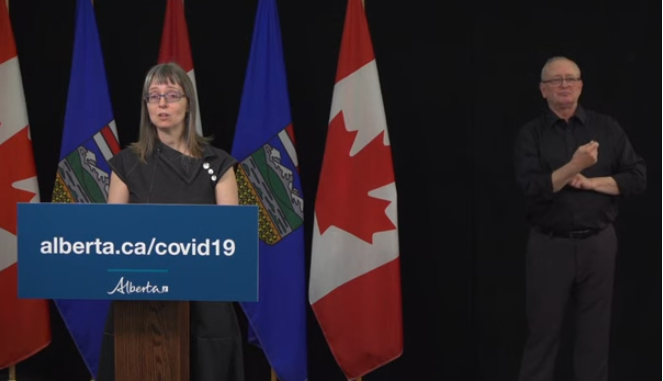 Alberta has recorded another 81 new cases of COVID-19 over the past 24 hours as well as two deaths.

One of the patients, a woman in her 80’s , was a resident of the Carewest Sarcee continuing care facility in the Calgary Zone.

The other fatality, a man in his 80’s, was also in the Calgary Zone though he was not a resident of any long-term care or continuing care facility.

Province-wide there have been 46 COVID-19 related deaths to date and 32 of them have been in the Calgary Zone.

There are now 1,732 confirmed cases of the novel coronavirus in Alberta and 877 of those are considered recovered.

Here in the North Zone, there have been two new cases reported, bringing the total for this region up to 105.

Since the pandemic began 79,781 COVID-19 tests have been completed in Alberta.

In her daily update, Chief Medical Officer of Health Dr. Deena Hinshaw announced the province is expanding testing eligibility to anyone in Alberta who has a fever, cough, shortness of breath, runny nose or sore throat. If you have any of these symptoms, you’re asked to stay home and fill out the AHS online assessment form to arrange for testing. Hinshaw says there is no need to call 811 if you’ve taken the online assessment.

The Government of Alberta also announced Monday that a province-wide trial will investigate the effectiveness of hydroxychloroquine (HCQ) in preventing hospitalization for people at the highest risk of developing severe symptoms of COVID-19.

The clinical trial, being led by the University of Calgary and University of Alberta, will recruit 1,600 Albertans to determine whether a five-day treatment of HCQ can prevent hospitalization for those at the greatest risk.

Health Minister Tyler Shandro says “our goal is to reduce the risk of severe disease experienced by individuals and reduce the burden on the health-care system by helping people recover from the effects of the virus at home.”

Laboratory studies have suggested it might also be helpful against COVID-19.