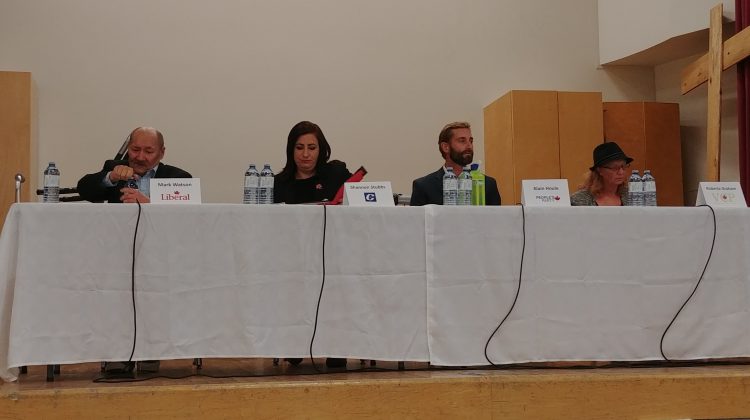 Residents in the federal riding of Lakeland heard from some of their candidates in the election last night. Dr. Bernard Brosseau School in Bonnyville was the host of a forum on Tuesday evening.

Candidates were given time to pitch their political ideas as well as answer questions from both the Bonnyville Chamber of Commerce as well as the audience. Big questions on the night included the oil and gas industry, equalization payments and provincial representation.

Asked how his party would make sure construction on the delayed Trans Mountain pipeline expansion got underway, Peoples Party Candidate Alain Houle says his group is ready to play hardball.

“From the beginning, the PPC stance has been to build pipelines. What they will do is impose pipelines on [reluctant] provinces, using section 92(10) of the constitution. What this does is grants jurisdiction over all types of work.”

When asked about a possible referendum on the formula for federal equalization payments, Conservative candidate Shannon Stubbs says its a fight she’s been active in inside the House of Commons already

“I talked about the equalization formula in the very first speech I did in the House of Commons in support of the Energy East pipeline. I talked about all of the revenue and taxes and royalties and contributions that come from energy development in Alberta and are shared across the country for roughly equal services in this country.”

Liberal candidate Mark Watson was asked his thoughts on the number of federal ridings and representation for the province. He says he encourages dissatisfied voters to make their voices heard.

“The boundary commission is the place to bring these issues up. I definitely encourage anyone who is interested to take that up the next time the commission is formed.”

“We will return to a step-immigration process over the next four years. What that means is, we will encourage immigrants that we need here. People like doctors and nurses.”

Advanced polling for the election begins on October 11th.