Three arrested, one wanted after weekend raid on home: RCMP

The RCMP in Cold Lake are saying a search warrant executed over the long weekend has resulted in arrests with one man still wanted by police. Mounties say they took a look around a home in the rural MD of Bonnyville after a firearms complaint.

Mounties seized guns, drugs and stolen vehicles among other items. Three men were taken into custody and now face charges including possession of stolen property. 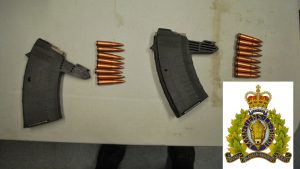