“Cold Lake was where his heart was”: Thomas Varughese Memorial Field officially opens 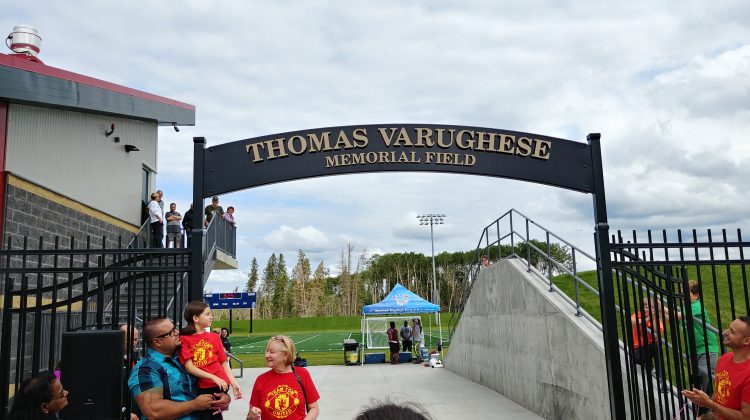 The newest addition to recreation in the City of Cold Lake is now open. On Saturday city officials, sports teams and the public gathered for a ceremony officially opening the Thomas Varughese Memorial Field outside the Energy Centre. The new field bears the name of longtime Cold Lake resident, volunteer and soccer supporter Tom Varughese who passed away in 2017.

Mayor Craig Copeland spoke at the ceremony. He says the field represents Varughese’s commitment to sport in the city.

“I think he would be so proud of how the field turned out. It will speak to the youth in Cold Lake being able to utilize the field for soccer. It also allows our youth a premier field that you only get to see in the big cities.”

The new artificial turf field features enough playing space for soccer and rugby as well as football and stands with indoor locker rooms and facilities. Construction began back in October of 2017.

The Varughese family was on hand to unveil the new arch bearing Tom’s name. Nyles Varughese says the legacy his father left was one to be proud of.

“We as a family, we miss our dad so much. We are so happy we’ll be able to visit this field and show our children and grandchildren how important it is to put people first, to help people and be part of a greater community.”