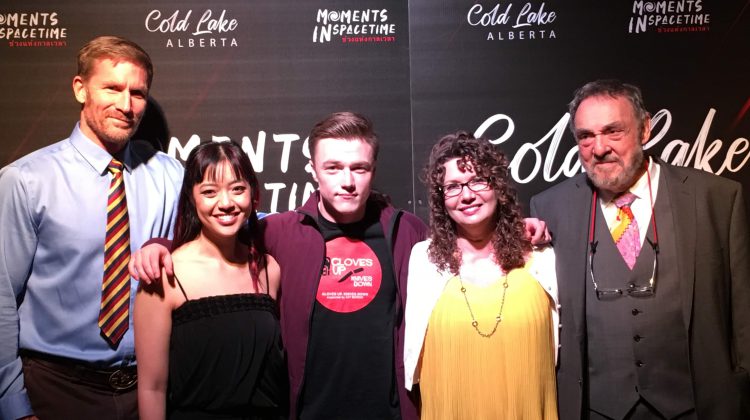 The "Moments in Spacetime" cast pose at a press conference held earlier in the year. the film is getting ready to shown at theaters in October- Kelli Wispinski/ Country 99

A Hollywood legend is singing the praises of the Lakeland. John Rhys-Davies joined the cast and crew of the locally-shot film “Moments in Spacetime” at the Grande Parlour Theatre in Cold Lake for a press conference on Wednesday. The Indiana Jones and Lord of The Rings star plays the role of a grandfather suffering from dementia and being cared for by his adopted granddaughter, played by Lakeland resident Patty Srisuwan. Rhys-Davies says he gained an appreciation for the local area when he came out to do the project.

“The community is so warm and so welcoming. You’re just a very open-hearted community. You’re good people.”

A number of locals around the area will feature in rolls in the film. As for Rhys-Davies, he says the movie hit close to home, as his wife suffered from dementia for a number of years.

“When your cynical L.A manager phones up and says ‘I’ve just read a script three times, it’s wonderful.’ You have to do it.”

Rhys-Davies’ scenes have been filmed but shooting continues in spots around Cold Lake and elsewhere. The crew says they hope to be done working for a fall release.