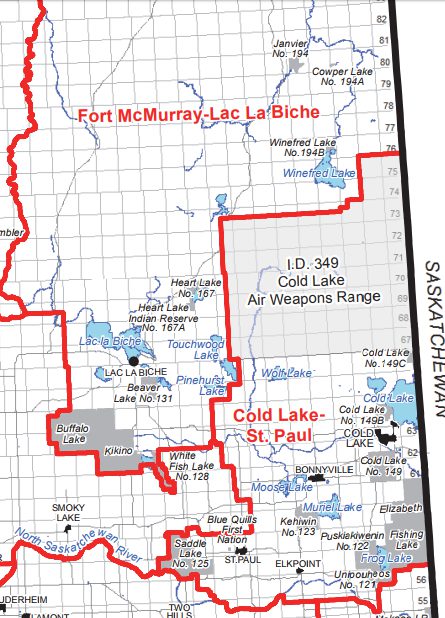 The Alberta Electoral Boundaries Commission has submitted their final report to the provincial government, and some changes have been made to the Lakeland from their initial proposal released back in May.

The first draft for what ridings Albertans will be voting in for the 2019 Provincial election were roundly criticized by Lakeland politicians. While the ridings aim for as even of a distribution of population as possible, local councils felt that their voices would be unheard as Edmonton and Calgary took the lion’s share of MLAs. A lot of communities in the region were put in the periphery of other larger towns as well, such as St. Paul sharing an MLA with Fort Saskatchewan and Lac La Biche with the southern half of Fort McMurray.

While Lac La Biche is still in a riding with Fort Mac, St. Paul has been decoupled from Fort Saskatchewan. Instead, the town and county will be joined with Bonnyville and Cold Lake into the new Cold Lake – St. Paul riding. The riding will also include Elk Point and the Cold Lake Air Weapons Range as well as the Elizabeth Settlement, Fishing Lake and Saddle Lake. Kikino and Buffalo lake will fall under Fort McMurray – Lac La Biche riding.

The final report now has to be approved in the legislature.