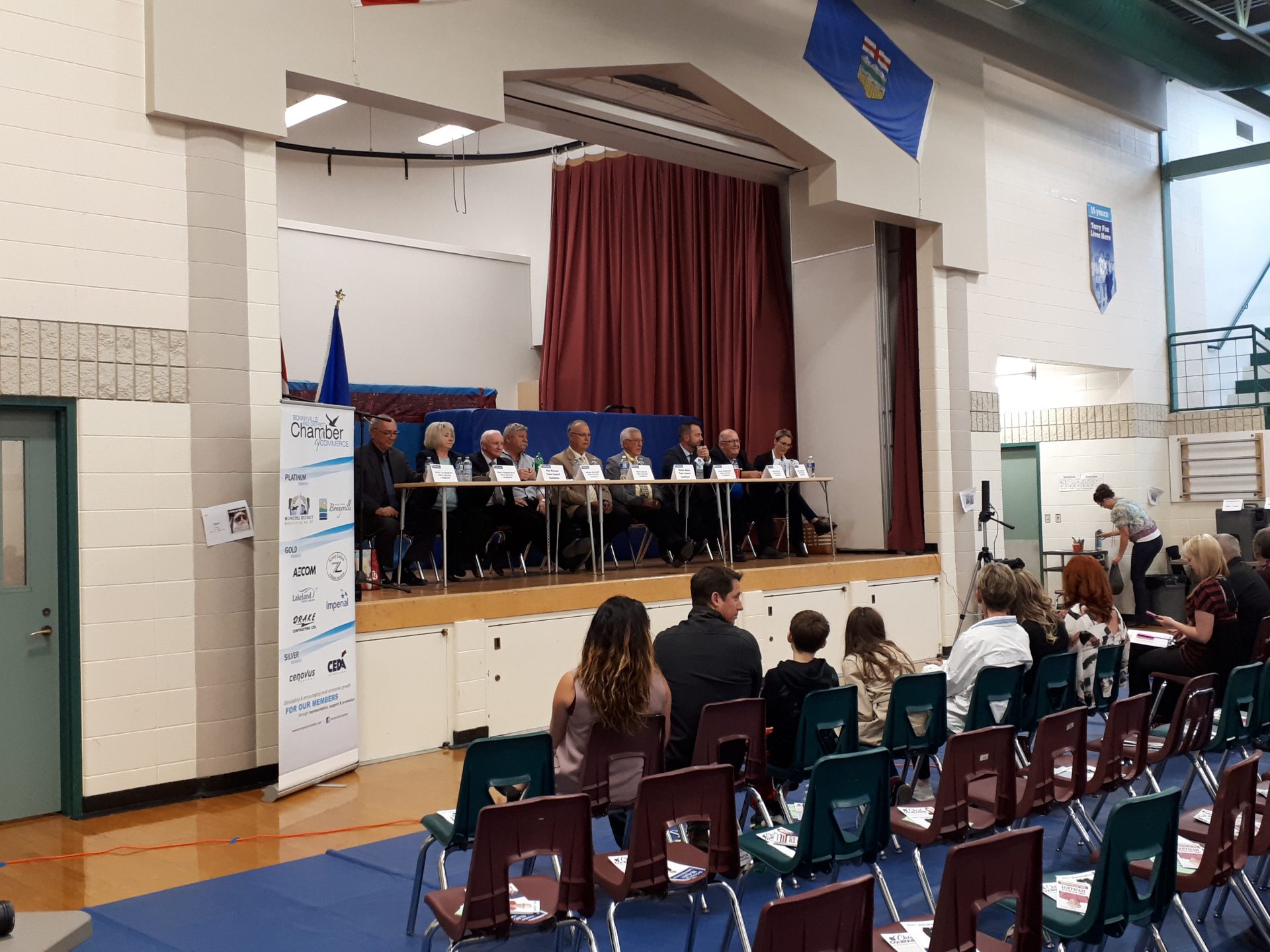 Among the usual issues like road maintenance, crime and regional government, candidates running for Bonnyville council were thrown a curveball when the floor was opened to questions at Thursday’s forum.

Incumbent candidate Ray Prevost was first in order to respond. “I guess it’s not going to matter where I stand since it’s obviously already gone through; but I’m not in favour of legalized marijuana. I think it’s going to lead to something else. Maybe by not legalizing it you’ll drive the market under the table as it normally happens, but it caught me by surprise that we would take that bold step at this time.”

Challenger Morris Mickalyk was next and said he agreed with Prevost. “It’s going to bring problems that we don’t really need here in town.”

Fire Chief and challenger Brian McEvoy didn’t see his condemnation of the drug as particularly relevant to the issue at hand. “The question is not ‘should it be legal?’ That decision has already been made. We need to stand on how we as a community are going to deal with that inevitability. Bylaws and regulations around the location of sales of marijuana and everything else; that’s where we need to take a stand. We need to make sure that is not available freely and readily and that is not available where young people can have access to it or see access to it.”

Incumbent Nestor Kunec was up next and more open to the idea than those before him. “This is really out of my jurisdiction. The federal government rules on those issues. However I did talk about diversifying our economy…”

After the audience stopped laughing, Kunec continued. “We can laugh about it, but if we can go ahead and have a grow-op – a huge one and supported by municipalities that we could export to other regions – it wouldn’t be a bad idea at all.”

Challenger Chad Colbourne answered next and took the family angle. “It’s pretty simple. I have five kids. I don’t want my kids smoking dope, but I think it’s key that we educate. It is going to happen, it’s coming down the wire. It starts with educating our children, educating ourselves of what the positives are with it and what the negatives are with it.

“It’s just like anything, if you’re going to use it in a positive sense – if it’s going to help treat cancer patients – then so be it… It’s already happening here in town. There’s a facility in town that’s already trying to get ready for this.

Incumbent Jim Cheverie reiterated that the issue was one of federal and provincial jurisdiction, adding it is no different than “alcohol when it went through prohibition then came out of it.” He also referenced the 800,000 square foot marijuana facility being built south of Edmonton planning to ship cannabis worldwide.

“We don’t really have a part to play in this other than supporting our police. If young people or old people or any of us are drinking and driving or [driving] high on marijuana, well then we should suffer the consequences.”

Challenger Elisa Brosseau joined Nestor Kunec in a more positive stance on legalization. “I had the opportunity to hear a speaker from Aurora Skies last week, and the innovation and technology coming out of this industry is incredible. It’s happening and maybe we could look at how we could capitalize on it on a local basis.

Incumbent Rene Van Brabant answered next. “I’m not in favour of it either, but right now we don’t have much choice. The only choice we have is that the town can set up bylaws for where they can set up shop. We have no smoking bylaws in town. We can even pass a bylaw for no smoking marijuana on the street.”

Incumbent Lorna Storoschuk was last to speak and took a firm stance against recreational use.

“I’m not in favour of it coming to Bonnyville… I believe it does have its place as far prescriptions [are concerned.] It does benefit a lot of people with illnesses. It think it will be too readily available and it will be a policing issue. It’s no different than when the drinking age is 18 to go into the bar. At 16 the youth will still be getting it. I believe we’re giving the youth the wrong idea if it’s used for recreational purposes. I do believe it is a gateway drug to drugs that will harm them even more.”

While officially there is nowhere in Bonnyville to obtain marijuana since it isn’t legal yet, several businesses in town do sell cannabis paraphernalia as part of their inventory.