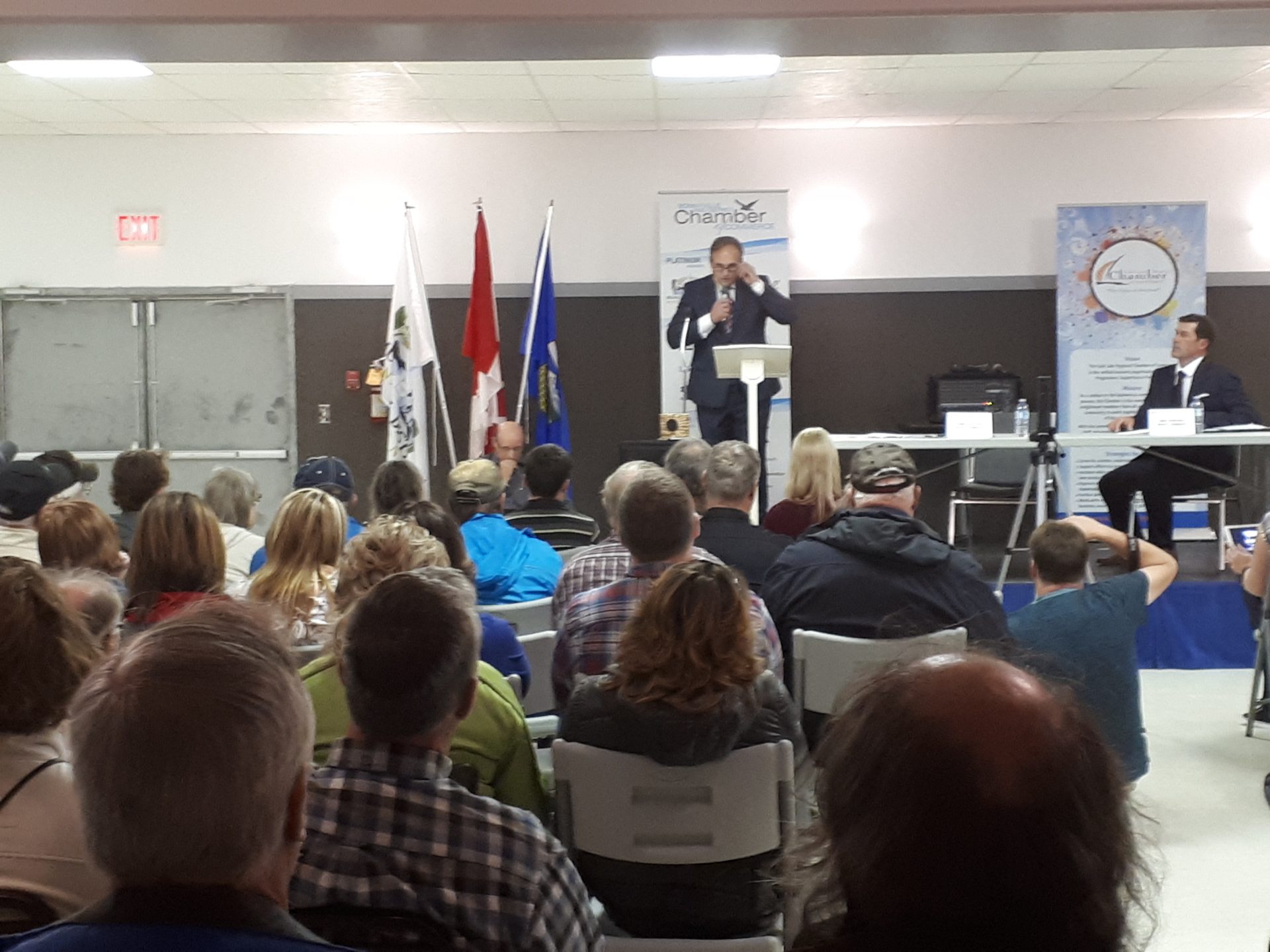 Candidates for Reeve of the MD of Bonnyville, Greg Sawchuk and Barry Kalinski were at the Ardmore Community Hall Thursday night to face the public and pitch why they should be elected on October 16th.

Both candidates started off with firm stances against merging into a regional government with the town of Bonnyville and Cold Lake. Sawchuk pointed to Lac La Biche County for his reasoning.

After providing opening remarks, the candidates took questions from the Bonnyville and Cold Lake Chambers of Commerce and from the crowd. A wide variety of topics came up.

Greg Sawchuk accused the current MD council of not taking adequate measures against rural crime, citing a crime forum he tried to organize three months ago he felt the MD “torpedoed” and a rejected proposal from local peace officers at the last council meeting that would have officers educate residents on what they can do to crime-proof their property. He added that as Reeve he would once again organize such a forum within his first month.

“It will include the Town [of Bonnyville,] the City [of Cold Lake,] let’s get all the players at the table. Let’s talk it out. There’s a number of things that we could do in the future. What I want to do is turn our region into a frying pan and make it so hot on these guys that they get the hell out of here.”

Kalinski however, said the Peace Officer proposal at the last council meeting was denied due to the concern that iw would look like scoring easy political points right before an election and it’d be more appropriate to pass it after.

“It would be political in my favour if we did this big program now. I just said in three weeks time with the new council we’ll make this motion. Yeah I failed back in June. You don’t want to blame the constables in our area because they did come up with a plan. It was one of those days at council when were ticked off even at say, even the Government of Alberta. They wouldn’t fund it. They won’t fund a lot of things and it comes back on the MD. It was just one of those days where -speaking for myself- I made a mistake and we didn’t fund this program…

“When it came back to council on Wednesday, I didn’t think it was appropriate for myself to do this big thing because it’s not politically correct. But if I knew Greg felt the way he did today, I would have definitely made the motion myself to make me look good.”

Kalinski got some laughs with that last line.

A recurring issue attendees addressed was roads in the MD, specifically the fact that the district does a lot of road work with their own crews and the amount of money spent on road work in general.

“We spend sixty million dollars of your taxpayer money on it,” said Sawchuk. “That’s a lot of money. There is no policy on upgrades and the actual construction of roads. These roads are decided on by a wishlist that goes back years and that’s why we see so many pet projects in the MD. I want to end that. I want to develop a policy so that roads are developed in a manner where they’re upgraded where they’re needed.”

Sawchuk was also critical of the MD using their own crews to work on roads instead of using local private contractors.

“It made sense when it was tough to find those contractors. There were pipelines going on, there was the new plant going in, they were busy. They aren’t busy now. We have some fine contractors in the area who could be put to work. There’s equipment staying still. There’s people unemployed as well. I think we have to give that a very serious look.”

Kalinski however, pointed out that the MD does make extensive use of private contractors already. “We just finished the Gurneyville Road. That was all contracted out. That’s a beautiful road. Just because we contract the road doesn’t mean it’s people that live in this area are going to get the job. I wish they always got the job but they don’t always get the job.

“According to our guys, they do stuff twenty percent cheaper. Sometimes I have a hard time believing that but that’s what they tell us.”

Kalinski agreed that doing projects in small increments, moving to another one than coming back to the original has to be changed.

“We’ve come a long way since the first year since we started. I think our roads are getting better and better the way we build them.”

Both candidates were asked if they felt the MD has a responsibility to help contribute funds to rec facilities like the Bonnyville C2 and Cold Lake Energy Centre.

“Yes I do feel the MD has a responsibility,” said Sawchuk. “Our residents are using these facilities; they enhance our quality of life. When we first got that C2 Centre going up I thought ‘Man I sure don’t want my tax dollars going to that great big thing. But I tell you, the hundreds of times I bet you that we’ve been influenced by it, it’s a really nice thing to have in our community. The same would probably go for up north as well with Cold Lake. They’ve got facilities that our MD residents are using as well.

The MD provided five million dollars in infrastructure funding to nearby municipalities last year. Sawchuk would like to see the calculation for how much each town gets include the number of MD residents using their facilities, but otherwise liked the idea.

Kalinski was more restrained in his support.

“I do also feel we have some responsibility… but the big problem is that sometimes these guys build the Taj Mahal. If they’re fifty percent more than what they could build it for, all the sudden they’re going to ask us, the taxpayers to put in all this extra money when they could have just built an ordinary building with the same purpose. I’ll put in whatever percent we think we should put in, but if they’re going to put in this building that’s way out of touch we’re going to put money forward for that.”

Kalinski later cited the new Cold Lake Fire Rescue building as such an example. He felt the status quo in how the MD funds these projects is working fine as is.

Kalinski also talked of an idea to install an obstacle course in the Kinosoo Ridge area to give the place a year round use. He also highlighted how schools make use of it.

Greg Sawchuk wished to highlight treating all Wards equally, citing the MD’s approval for funding of the new Walsh Field but denying funding for Glendon School to build a new athletic field around the same time, as well as the Grand Centre Golf Course being denied funding two years ago but the Bonnyville Golf Course receiving funds this year.

Greg Sawchuk proposes a freeze on revenues for the next four years, meaning that even if the MD brings in more money with the same mill rate, they’ll lower the rate down until revenue is the same as it was in 2017.

Barry Kalinski thought that was a little pie in the sky, saying he’s never seen taxes lowered anywhere. He did however, highlight that the MD freezed taxes for four years during his term.

Voting for reeve and council is October 16th.