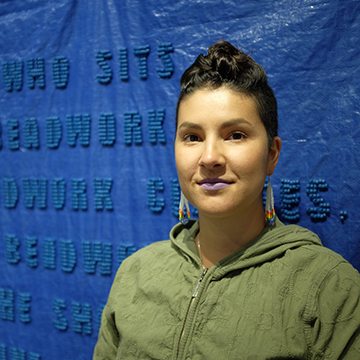 The Native Arts & Culture department at Portage College has announced that award-winning Métis visual artist Amy Malbeuf will serve as Artist in Residence for the 2017/18 academic year. Malbeuf is from Rich Lake, Alberta and will be sharing her knowledge, skills and experience with Portage students.

Malbeuf has previously been an Artist in Residence at the Royal Melbourne Institute of Technology in Australia; The Banff Centre; and The Labrador Research Institute. In 2015, she was one of two Canada Council for the Arts fellows at the Santa Fe Art Institute, New Mexico.

Malbeuf’s art has been exhibited nationally and internationally at such venues as Art Mûr, Montréal; MacKenzie Art Gallery, Regina; Art Gallery of Alberta, Edmonton; and Pataka Art + Museum, Porirua, New Zealand. She is profiled in the most recent edition of Canadian Art magazine and will also be featured in an upcoming TV series Skindigenous airing on APTN in January, demonstrating traditional tattoo methods.

Currently Malbeuf is working alongside Portage College instructor Ruby Sweetman to create works of art for the Alberta Foundation for the Arts. This Commemorative Art Project tied into the College’s Museum of Aboriginal Art and Artifacts is titled ‘Hide Tanning: Tradition Inspiring the Present and Future’.

Malbeuf holds a Master of Fine Arts in Visual Art from the University of British Columbia, Okanagan and is a past graduate of the Native Arts and Culture program at Portage College. In 2016 Malbeuf received a Lieutenant Governor of Alberta Emerging Artist Award and a William and Meredith Saunderson Prize for Emerging Artists in Canada from the Hnatyshyn Foundation.